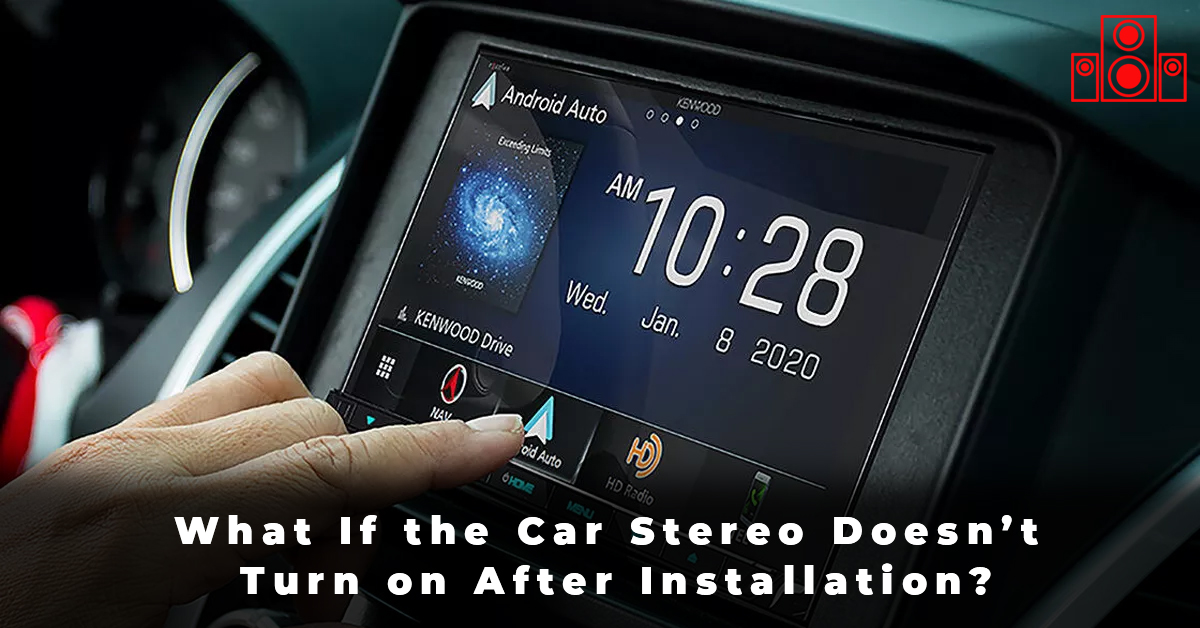 The car stereos can sometimes be very annoying, especially when they fail to turn on. And this is the biggest problem with electronic gadgets, including your car stereo. It may just stop working anytime, for the tiniest reason behind sometimes.

When you get to sense your car stereo’s problem, you automatically know it’s time that you get it fixed and you got to have a lot of money for that. But this is not always the case. It might be having an issue that could be fixed with a little effort and that’s it.

Or sometimes, it may have a bigger internal issue which would need a proper professional and time to get fixed. But before you go to get the issue fixed and spent lots of money on getting it replaced, make sure you try some basic things if you can.

There may be different issues in your car stereo which prevent it from working properly. They may be; a blown-off fuse, a problem with the antenna, an issue in the speakers or wiring, and so many other reasons. And to get these issues sorted, always consult a Technician.

Although there are plenty of issues that car stereos face very often, a few very common of them are discussed below.

Sometimes, you turn on the car Radio and it refuses to work. Although there isn’t any obvious issue you can say it has, but there might be an internal issue that is preventing the Radio from turning on. Most probably, if the radio doesn’t turn on, it may be due to an issue in the ground or power.

In this situation what you can do is, check the fuse firstly. If you find it blown away, it means it needs to be replaced. But you obviously shouldn’t be doing this on your own if you do not have enough knowledge about how to fix such things.

You might think that you can fix it, and you start to fix it too, but then you may get exhausted in the next few minutes because it can be quite complex. So, it is always better to get to a technician and get your car things get fixed.

Car Radio Turns on But There is No Sound

Another very common problem that car radios often have is that when you turn on the radio, it does get turn on, but there is no sound coming from it. Now there may be different reasons for this problem.

In this case, you need to get the amplifier and wire connections checked. The amplifiers do not have a fixed place to get fitted. They may be fitted in different places. And how difficult or complex it would be to fix the amplifier depends on its location.

The other reason which could be a broken wire, you need to get the wires fixed. Or maybe if the wire isn’t actually broken, there might have arisen an interruption in the way between wires and the speakers. In both these cases, you should consult a nearby Technician.

Only the Radio isn’t Working

Other than this, retraceable whips can also be a reason for the affected antenna.

Things You Should Do to Look for Solutions

Obviously, when your Car Stereo does not turn on, you would want to know where actually a problem is. And when you get to know the issue, you look for the solutions. There may be different kinds of internal or external issues which are a reason for the car stereo not turning on.

In order to find and fix the issue, you need to tackle each of these issues one at a time and then check if the problem has been solved. If yes, that would be great. If no, move on to the next thing you need to try.

So, here are some car stereo-related problems and their solutions.

Look Over the Fuses

Without having to worry, when you see your car radio isn’t turning on, the first thing to try is to check its fuses. And if you do that by yourself, you should have some basic diagnostic tools.

Most of the car radios have one-two fuses. In addition to this, there may also be amplifier fuses. One of these would most probably be located in the accessory fuse block or the main of your vehicle. If you’re an expert on automobiles or you have enough experience, you may figure out the problem just by looking at it.

In some of the cars, the infotainment system or often called the head unit has built-in fuses, either located on the backside or somewhere on the power wires. If any of these fuses have issues, you need to replace them. But remember that a blown fuse should not be replaced with a fuse of a larger amperage.

In order to access the connector, remove the head unit and verify if the connector has been seated properly. If you feel like there is a problem with the pigtail connector, you can simply remove it and get it replaced.

Also, if there is such a setting in your car that an adapter connects the head unit and the factory wiring, then one thing that you can try is to unplug the whole thing and then connect it again. This is basically done to make sure that there is an active electrical contact between things.

In many cases, reconnection of the adapter would fix the issue. If you see that unplugging the adapter and then plugging it again has solved the issue for you, then leave it unplugged for 10 to 15 more minutes and then check again, just to ensure that the problem has been completely fixed.

Check for the Power at Head Unit

When you have examined the fuses and other connections and you’re sure that they are working fine, then the next step to look for the problem is to check for the availability of power at the head unit. This will indicate if the radio itself has power or not.

You can check for power at the back of the radio by using the test light or multimeter. Although both of them are going to be helpful in this case a multimeter would help you get a more accurate idea about your concerns.

For example, if there is a voltage drop in the radio, a test light would not be much helpful in that case. So, you’ll need a multimeter.

In most cars, there are two power wires. One wire connects with the memory of the radio in order to provide the power to the radio and it always remains hot. While the other one only becomes hot when the ignition key is turned on.

The order of connection of these wires is very important. If the wires are reversed due to some reason, the radio would fail to work.

This may be because you didn’t notice this while checking the fuses. And there has been an in-line fuse hidden somewhere along the wire. So, what you need to do is, trace the wire back to the source and find the broken or weaken point. When you find it, fix it or get it replaced.

Examine the Ground at Head Unit

If all other things are good, then the next step is to examine the ground at the head unit. The issue in the ground may not cause a total failure of radio, but it may cause the ground loops. So, it is important to check the condition of the ground before you decide to get the unit replaced.

To examine the ground, first of all, you can simply check it visually in order to know if there is rust in there or if the ground is loosely connected.  If this is the case, tighten the connection and find a solution for the rust in the ground.

The other method that you can try is to use a multimeter between the pigtail connector of the head unit and the ground on the body of the car. If the ground has disconnected, this is probably the reason you’re looking for.

If there is no issue with the fuses, connections, power availability, wiring, and ground, then the head unit itself is defective. To test this, connect the ground and power leads directly to a source of 12 Volts. If they both show good results, you need to find some other possible reason for your radio not turning on.

And if the connection shows poor results, the Head Unit needs to be replaced.

If your car stereo does not turn on, this may be due to different reasons, such as weak connections, low battery, damaged wiring, problem in the power availability, blown away a fuse, or due to an issue in the head unit itself.

Whatever the reason may be, it is always better to contact a technician. Firstly, you won’t have to make yourself tired by trying hard to detect the issue and find the solution to it. Secondly, the technician would fix it in a professional way and it would work properly for a longer period of time.

What would cause a radio not to turn on?
The most common reason, if the radio doesn’t turn on is the blown away fuse. So, there is a possibility that one or more fuses of your car stereo have blown away.
How to fix a blown away fuse of your car stereo?
A blown away fuse can not be fixed. It can only be replaced.
How do you tell if your radio is fried?
If you hear the rattling or popping sounds, your speakers are fried. A rattling sound indicates the likely blown speakers. While the popping sound indicates some damage in the tweeters.
How much does it cost to fix a car radio?
This depends on three main things. Firstly, what’s wrong with your car radio. Secondly, if your vehicle is new or an older one. And thirdly, if the fixed stereo has a basic radio or some fancy, unique kind of radio. So, the cost of fixing a car radio ranges between $100 to $1000.
Why is my car’s subwoofer not working?
Most commonly, subwoofers stop working if the speaker wire has been loosened or damaged. Another reason may be the damaged speakers. If the speakers are damaged, subwoofers won’t work even if everything else is working properly.